Giving it the ability to execute beach and landings and insert or extract river squads of up to 60 Special Forces or Marines. The X 18 ATC has a crew of 5, and the aft deck working area rated up to 5 ton for carrying logistic cargo, drones and a high-speed Interdiction inflatable Raiding craft for boarding and SEAL insertion.

The Cocker ill C 3030 is a unique multi light and protected remote mission weapon station with innovative roof system that allows unique observation. It system. It’s panoramic sight integrated system is slaved to the cannon for infantry support configuration. Gun elevation goes from -10 ° up to +60°. The ballistic protection is up to level 4 STANAG 4569. Ammunition loading is under armored and has a single/dual feeder with a minimum of 155 ready-rounds. 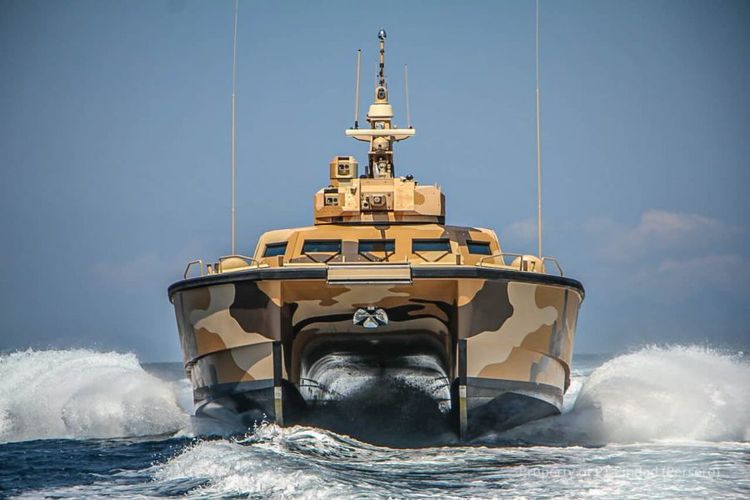 The geopolitical environment and the future naval/air/sea battlefield present demanding challenges for structure, equipment and tactical employment. Conventional warfighting in support of national territorial defence will remain the benchmark against which armed forces must train and prepare, involving the commitment of combined arms in a battlespace where the capability to rapidly manoeuvre and concentrate fire will be at a premium. However, it is operations other than conventional war that are likely to remain a more common form of commitment, ranging from border skirmishes to counter-insurgency to participation in UN or coalition peacekeeping operations.

Within this developing trend toward greater tactical flexibility, advances in the design and construction of new, lightweight and highly agile boats, coupled to improvements in onboard weapon system lethality (including missile-firing capabilities), fire control, and situational awareness have begun to blur the traditional strengths and weaknesses of larger ships such as corvettes and frigates, and small, highly manoeuvrable vessels such as the X18. This demand for greater tactical agility and capability comes at a time when parallel constraints of reduced defence budgets and increasing equipment costs lead to additional pressure to develop multi-purpose solutions.

In the shallow waters, the X18 Tank Boat is able to take full advantage of its one-metre draft to get to places where other heavily armed patrol craft or naval ships cannot and ensuring that those crafts it does meet are out-armed when faced with the 105mm version from Cockerill.

Negotiating the at-times difficult and shifting coastal waters along the country’s shoreline, the vessel is also ideal for heading up busy industrial maritime thoroughfares, its agility and highly-trained crew the perfect foil for the vast numbers of traffic out on the water today.

A squad of embarked officers stand ready to board vessels and traders working the littorals to check permits, gather information and determine the atmospherics. With the backdrop of any such search backed up by the stealthy outline of the Tank Boat, all stops are met with willing participation from civilians. For such a compact vessel the outboard space affords room to store contraband before it is returned to base for disposal.

Suitably loaded the team are able to continue on their patrol and ensure the security and safety of the hard-working local coastal industry can go about their business with the minimum disruption to their lives.

Maintaining the security of the country critical port and oil infrastructure would likely be one of the most pressing tasks that the Tank Boat would be required to perform. Thanks to its size and relatively low logistical footprint the vessel would be able to be based comfortably in ports and other smaller shore facilities in support of a wider security effort, maintaining visible patrols with the speed and hitting power to be able to catch suspicious highly mobile craft.

Because of its low logistical footprint and high speed to rapidly transit from one site to another the Tank Boat is providing a reassuring presence to the workers, and helping to maintain the continuous operation of the key industrial asset.

A series of such craft could successfully maintain a very visible high-capability deterrent against threats and also act as a mobile fire support platform when required for use in high-intensity combat situations. Given its medium and high-calibre weapon platform, it would likely outgun any similar-sized regional state adversary and be more than a match for the best that non-state actors could present.

Cruising through the flat and calm waters of the region the Tank Boat conveys all the authority of a large surface asset with the agility of a coast guard patrol craft. The 105mm Cockerill main gun outmatches similar capabilities in other regional navies and coupled with a top speed of around 50 knots this platform would be able to present itself as a strong, capable and modern presence of the national sovereignty of the country.

Merchant traffic comes to see the steadying influence of the stealthy vessel as a reassuring presence during times of enhanced tension thanks to the unique capabilities it possesses and the enduring efforts of the crew in maintaining marmite security in the region. The Tank Boat maintains a ready presence and is frequently tasked with working with regional and international allies operating in the region.

Able to engage at short, mid or long-range as the situation dictates, the modular nature of the platform also presents options in the future for different payloads and fits, including the potential to ‘unman’ many aspects of its function thereby reducing risk to embarked personnel and improving endurance and capability. The 600nm range enables it to carry out long distance power projection efforts to the very farthest coasts.

Kept at a high state of readiness the Tank Boat and its crew sit ready for the alert, able to respond at a few minutes notice from a variety of shoreside facilities and small ports. The call comes out that intelligence has come through about an imminent attack on merchant shipping approaching the Strait of certain country.

With its low profile and high speed, coupled with the automatic threat detection and main weapon system, the Tank Boat is able to act as a mobile Quick Reaction Force (QRF) for deployment after a security threat is established and contact made. Its impressive defensive capability successfully prevents the impending attack, helping to save the lives of foreign merchantmen who radio their thanks, before the Tank Boat quickly returns to base to refuel and rearm, ready to head out again to maintain the safety and security of those at sea.

The X18 is capable of working in partnership with existing overt and covert military assets already in service with the certain country’s Armed Forces and offers a unique combination of low visible profile and high intercept speed and brings the vessel into the kind of military efficacy that larger platforms such as OPV and corvettes would traditionally fulfill, at a fraction of the resource.

A call has come in of a heavily armed force of non-state actors have taken over a key shore-side industrial facility. Heavy rains in recent days have turned into raging rivers and roads remain unpassable for motorised ground forces. Changeable weather makes the use of rotary platforms difficult, and authorities suspect that the enemy could have ground to air missile capability.

However, the enemy force didn’t count on the response time of the X18. Using its main gun and advanced sensors it is able to stay on station supplying a steady stream of intelligence on enemy movements. When the time comes, it’s 105mm barks a series of percussive shells to cut off any chance of the enemy slipping away, while infantry units are able to move up to neutralise the threat thanks to the accurate suppressive fire.

With their back to the water, the enemy never thought that such firepower, normally reserved for an infantry fighting vehicle or light tank, would be able to be directed at them from that direction and pay the price for their mistake. Without the capability of the 105mm, the game-changing vital offshore gunfire support role would not have been afforded to the ground forces.

The Tank Boat moves unseen close to shore following the action, before emerging to deploy a squad of Special Forces to assist in the clear-up operations.

The X18 platform offers all capabilities to quickly transport, evacuate citizens in difficult situations to places where they can receive all necessary medical care. Its 5 tons aft-deck platform is an additional asset to transport medical supplies to remote and difficult access areas.

HOW TANK BOATS ARE MADE AND ESTABLISHED

Our experts are from international leader of gun and boat design.

It has been successfully tested and trial by the expert in gun and boat operation. 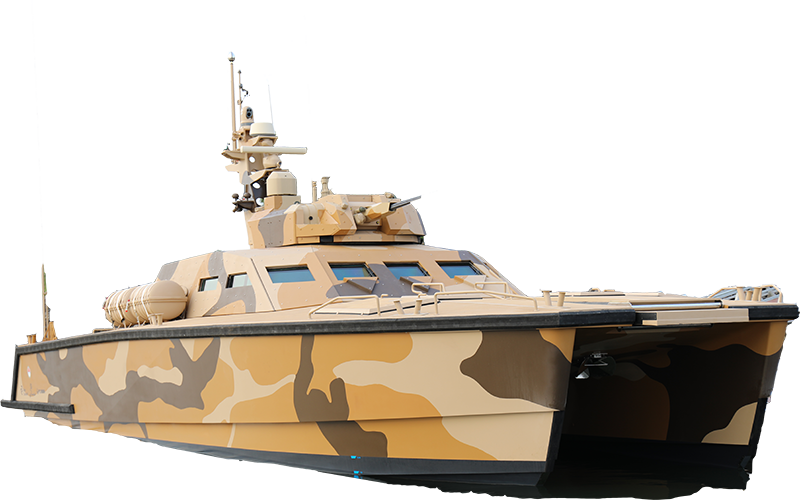 Maximum speed at mid-load is 50 knot

Up to 600 nautical miles

PT Pindad is an Indonesian state-owned enterprise specializing in military and commercial products. PT Pindad provides the main weapon systems required to support independence in defence and security of the Republic of Indonesia.

Have any questions? We’d love to hear it from you.