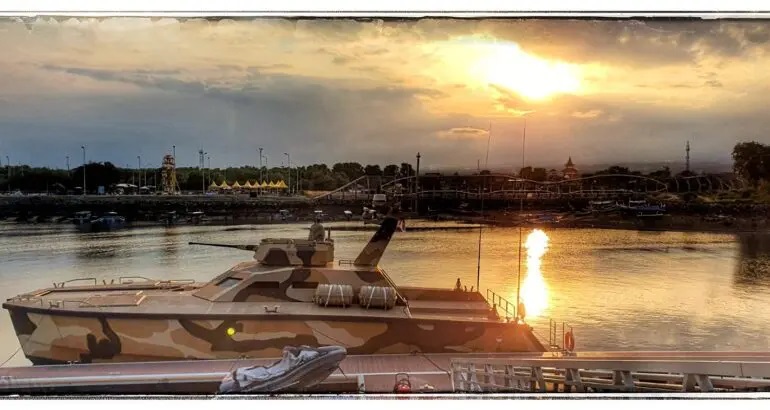 Indonesia’s X18 Combat Boat program is moving towards first delivery, John Cockerill Defence (JCD), which is supplying the armament, told Naval News. A protoype has been put in the waters on April 28 in Banyuwangi Waters.

Formerly known as the “Tank Boat”, the Combat Boat was developed for the Indonesian Army (TNI AD) and will be known locally as “Antanesa”.

« The boat will undergo builder trials to check all of its functions on the water. The boat is expected to support TNI operation in swamp, river, coastal and sea as well as coast guard duties », PT Pindad said on its Facebook page.

The X18 Combat Boat  is a program launched by the Indonesian Ministry of Defense. Formerly known as « Tank Boat », it is executed by a consortium in which PT Pindad is the lead integration in collaboration with PT Lundin (North Sea Boats), PT Len Industri (Persero), and PT Hariff. These boats are intended for the Indonesian Army (TNI AD) and will be known locally as “Antanesa”.

This « APC » variant of the Combat Boat is primarily designed  for troop transport tasks. It will be capable of carrying up to 60 troops, 5 tons of cargo, drones and will be manned by a 5 strong crew.

The vessel integrates John Cockerill Defense’s (JCD) Cockerill 3030 unmanned turret. The Belgian company also made engineering and construction improvements in regards to the marine environment and the specificity of the catamaran composite material.

The APC variant will have further enhancement, such as missile firing capabilities, JCD added. Drones integration, for example, is currently being tested. Provided by NORTHSEADRONES, a cooperation between Norway and Indonesia, the drone will be linked with the boat and turret and will be used for surveillance and reconnaissance tasks.

Sea trials will last until the end of May. The Factory Acceptance test (FAT) step, as well as the site acceptance test (SAT) and harbor acceptance test (HAT), will all happen in May 2021. At sea live firing tests will begin next month. The delivery to the TNI-AD has not been decided yet, but could occur likely around September 2021.

« This first X18 Combat Boat will be ready to welcome foreign delegation on second half of [20]21, » a JCD representative told Naval News, adding that the vessel « will really appear as a world premier with all the latest generation of navionic and communication system ».